Posted on August 7, 2013 by LookingAtGlass

The piece, titled “Water Walk,” is inspired by water, its movement, the play of reflections on its surface, and the connections between water and healing. Standing at the core of the new state-of-the-art facility, “Water Walk” is the physical and conceptual foundation of the Hospital’s art program, whose mission is to contribute to the overall healing environment through pieces that engage, inspire, and enliven patients and visitors. 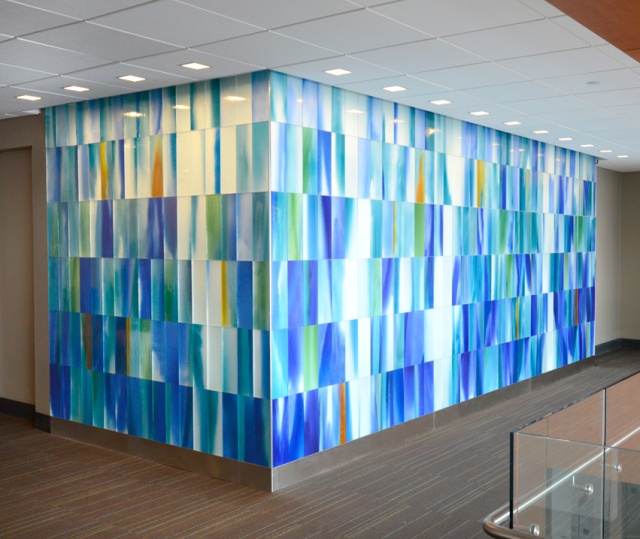 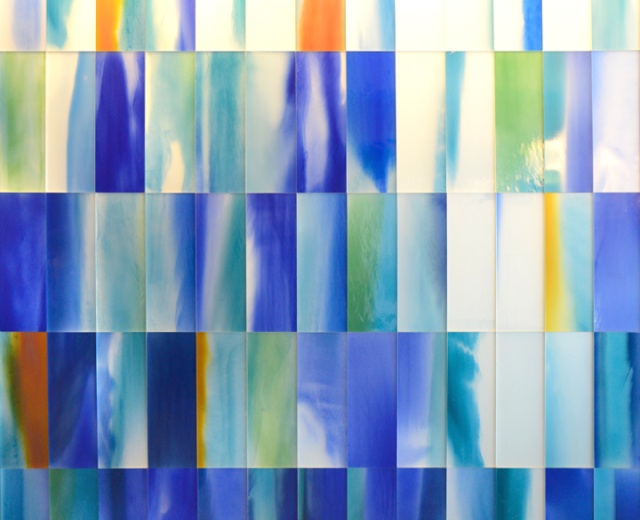 “Throughout history, water has been considered nature’s healer,” Housberg observes. “No matter what one’s beliefs or background, human beings are drawn to water for its soothing movements and fascinating textures, for its meditative sounds and ever-changing surface. It is a metaphor for the presence and flow of life and spirit. It can be a point of focus for meditation and reflection.” This relationship between water and healing was Housberg’s inspiration for the work, which consists of milky, mouth-blown sheet glass with vitreous paint laminated to mirror. The installation glows with the lobby’s ambient light, reflecting the movement of the viewer and changing lighting conditions.

Housberg was invited to the project by Boston Art Inc. in consultation with Partners Healthcare, Spaulding Rehabilitation Hospital, architects Perkins+Will, and a focus group comprised of other community stakeholders. Housberg collaborated with Derix Glass in Taunusstein, Germany to paint and fabricate the mirrored glass panels. In tandem with its concept, the installation also addresses practical considerations. The glass visually ties together the lobby and mezzanine. It turns a formerly imposing elevator core into a humanizing sculptural element and creates an illusion of depth in a relatively compressed lobby space.

Spaulding Rehabilitation Hospital is one of the largest inpatient rehabilitation facilities in the United States and has been consistently ranked in U.S. News & World Report’s Best Hospitals Issue each year since 1995 – the only rehabilitation hospital in New England to do so. Spaulding’s holistic therapeutic approach strives to restore patients’ independence and ease their transition back into the community. The new facility in Charlestown is a national model for environmental and inclusive design. It offers harbor views as well as water access for patients to canoe, kayak, and windsurf through its Weingarten Adaptive Sports and Recreation Program. Having officially opened its doors on April 27, 2013, many of the facility’s initial patients were victims of the April 15 Boston Marathon bombings.

Paul Housberg is known for his inventive applications of glassworking technologies in architectural settings, including hospitality, corporate, healthcare, public, and residential spaces. Central to his work are the tactile qualities of glass and the expression of its materiality. Born in New York City, Housberg studied painting early in his career, but was drawn to glass for its atmospheric color. After receiving his Bachelor of Fine Arts and Master of Fine Arts degrees from the Rhode Island School of Design, he studied in England with Patrick Reyntiens, a pioneer in contemporary stained glass. Later, as a Fulbright Scholar, Housberg pursued his art at the International Center of Glass Research (CIRVA) in Marseilles, France. He has completed projects at Princeton University, Mayo Clinic and California State Teachers’ Retirement System Headquarters (CalSTRS) among others. Housberg currently lives and works in Jamestown, Rhode Island. To learn more about Paul Housberg, please visit http://www.glassproject.com/.

My name is Patricia Linthicum and I love design. Join me in the exploration of glass used in interior design and architecture.
View all posts by LookingAtGlass →
This entry was posted in Architecture, Art Glass and tagged Architecture, art glass, Glass. Bookmark the permalink.