Spring-Clean Your Blog in 5 Easy Steps by Ben Huberman.

I just spent 2 days off from work cleaning my office. Yes, it took 2 days. Yes, I am ashamed. Right now, I’m feeling a bit like a hoarder. How could I possibly have accumulated so much stuff?

There is no better feeling than a freshly cleaned, decluttered office. All of this purging got me thinking about doing the same for my blog. I remembered seeing a blog post about cleaning your WordPress blog and went back did a quick search and found it. I followed the steps listed by Ben to help me clean out the Looking At Glass blog. All five steps were extremely easy to do.

Why not do a little Spring-cleaning on your blog today? It is easy and you won’t have to take a gazillion trips to the recycle container and trash dumpster to get it done!

The first day of Spring is just around the corner, and with it comes the annual ritual of airing, dusting, and decluttering our homes. While you’re in cleaning mode, why not devote a few minutes to streamlining your blog, too? (Note: if you live south of the Equator, these tips are still valid!)

This isn’t just about appearances (though those matter), but also about traffic — a clean, attractive, easy-to-navigate site is one readers are more likely to visit again. Here are five things you can do in the next ten minutes to see immediate results.

Theproblem: Widgets are a great tool for organizing your content and customizing your blog’s look. Overstuffing your sidebar (or other widget areas), though, can make your blog look busy, disorganized, and less professional.

What you can do: Look at your sidebar as if you were…

Posted on January 2, 2014 by LookingAtGlass

My focus this year is on my time management skills.

Mantra: Spend your time wisely and you will achieve.

I always seem to have more work to do than available time.

2013 was a very successful year for The Glass Market and I find that the business requires more and more of my time.  That is a very good thing.  In spending more time working on The Glass Market business, I have less and less time to write this blog.  I hope that you are following all of my pins on the microblogging site, Pinterest.  If not, please join me on Pinterest (click here to go to my boards).

Right now, I am exploring a number of options that will allow me to keep this blog going in a timely and efficient manner. I miss sharing ALL of the amazing and inspiring glass projects and products with you here at Looking At Glass.  It is time to take the next step forward.  Therefore…

I will be back with you soon with a NEW and IMPROVED Looking At Glass!

Posted on December 24, 2013 by LookingAtGlass

Today I am looking at Holiday Windows.

Hello fellow glass lovers.  Yes, I am still here.  If you have been looking for me I have been on Pinterest the past few weeks.  I have been very busy this month and microblogging has been a very easy way for me to keep looking at glass in quick bursts of sharing.  I hope you have been following my Pinterest boards to see what I am looking at on a daily basis.

If you have followed this blog for a year or more you know that I love holiday windows.  I think that they are magical.  The child in me loves the story and make-believe worlds that they create.  The technical side of me is fascinated by the mechanics and artistry in creating the scenes.

I hope you have a wonderful holiday.  Believe in magic and fine artistry.  Celebrate all of your good fortune for 2013 and join me on Pinterest for 2014!

Posted on December 5, 2013 by LookingAtGlass

This time of year we are all busy.  I think it is interesting that while mother nature slows down for a long winters nap, we humans all seem to go into hyperdrive.

A few years ago, I created a GlassChat Holiday Party Pinterest Board.  Every year I enjoy adding pins to the board.  The board is full of beautiful and silly holiday items.  It always makes me smile.  I invite you to take a look and enjoy the pins.  Just click on the link above or click on the photo below to go to the board. 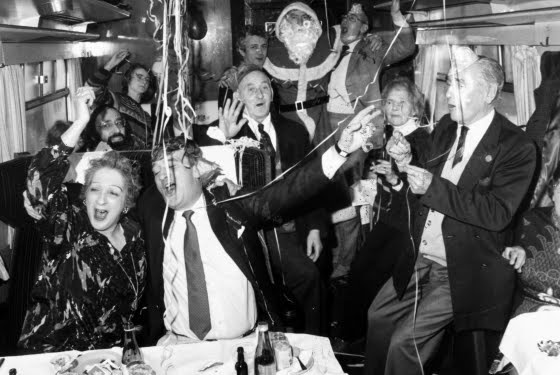 And speaking of very busy, I have decided that between now and the New Year, I will be using Pinterest every day to look at glass.  Microblogging just seems to fit my schedule right now.  I will be publishing this blog once a week to feature my favorite pins from the week.  I’m always open to new ways of sharing beautiful glass and I think this time of year is a great time to try something new.  Let’s see how this little experiment works.

Posted on December 4, 2013 by LookingAtGlass

Today I am looking at nativity scenes.

A nativity scene or crèche (/kreɪʃ/; also known as a manger scene, or crib) is the special exhibition, particularly during the Christmas season, of art objects representing the scene of the birth of Jesus.

I had a difficult finding the artist for this scene.  I did find a blue version by Jose Pinpinco at NOVICA 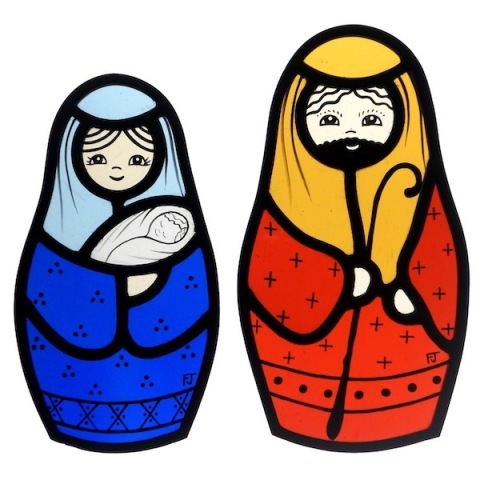 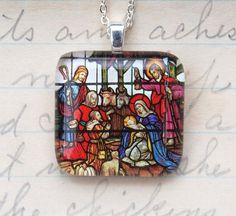 Posted on November 27, 2013 by LookingAtGlass

Today I am looking the Jayne House in Philadelphia, Pa.

I found this beautiful house restoration on Houzz.com, yesterday.  I love the skylight.

The Jayne House (Frank Furness, 1895)
With its intriguing and idiosyncratic terracotta façade, the unique power and vision of Frank Furness is immediately evident. Every square inch of the house was studied by architectural archaeologists and historians who joined the design team to restore this astonishing structure to its original use as a family residence of inimitable character. Custom sconces blend with period lighting fixtures, 19th Century antiques blend with original built-ins and a scenic mural based on English country house precedents supports the astonishing 400 square foot leaded glass skylight.

Woohoo! If you celebrate the Thanksgiving holiday, I know that you are looking forward to a 4 day weekend.  I am planning on eating lots of great food and spending time with my family.

This lady doesn’t look like she is going to hurt this turkey.  She looks at him like he is a pet.  I certainly hope so for his sake.

I have so many things to be grateful for this year!  I hope you do, too. 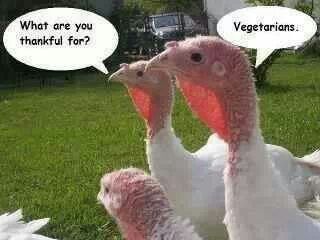 Enjoy the long weekend, relax, and be thankful.

I will see you back here on Monday!

Posted on November 26, 2013 by LookingAtGlass

Today I am looking at Holiday gift ideas for the animal lover. 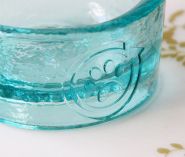 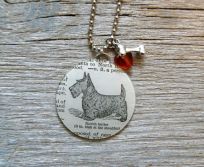 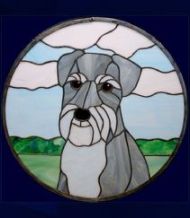 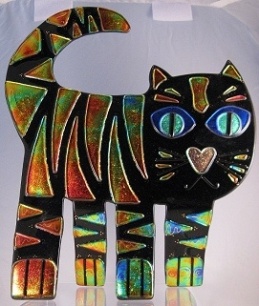 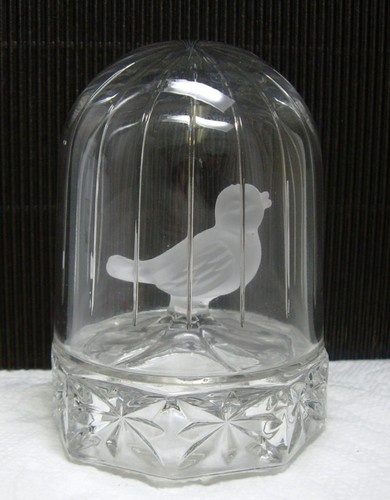 Posted on November 25, 2013 by LookingAtGlass

Today I am looking at DIY crafty Thanksgiving table decorations.

I am counting down the days to the yummiest day of the year.  Thanksgiving.

Contrary to what you hear (or see on television) Thanksgiving is not about saving money on gifts.   Thanksgiving is about spending time with family and being thankful for all the wonderful people and events in your life.  I think that celebrating Thanksgiving is becoming a lost art.

I remember Thanksgiving from my childhood and it was a special day.  It was all of the thoughtful details that made the day special.  We used actual tablecloths and cloth napkins.  We used special silverware and china that was brought out and put on the table only on holidays.  We ate foods that we didn’t normally eat.  It took the whole day to make the meal.  Thanksgiving was a special event.

This year, why don’t you try to keep Thanksgiving the special day that it was meant to be?  Have you thought about what you will do to decorate your table?  Adding a centerpiece or table decoration is easy.  You can even get your kids to help you!  Here are a few DIY crafty ideas for decorating your Thanksgiving table. 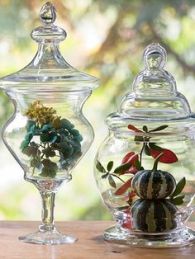 All photos are from pinterest.com

Posted on November 22, 2013 by LookingAtGlass

Today I am looking at a holiday gift ideas for the plant lover. 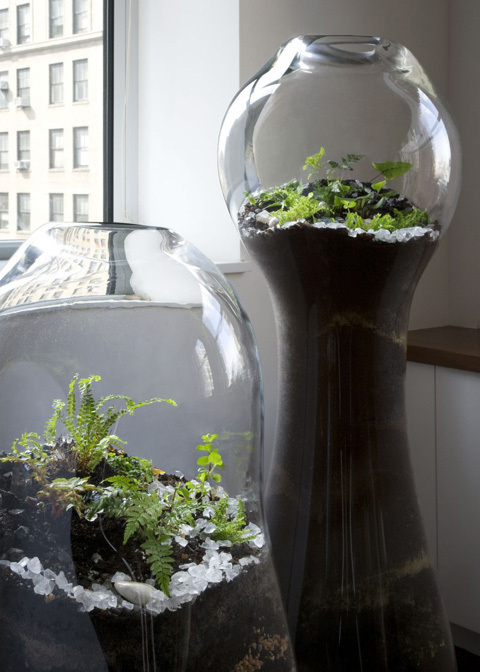 The Slug and Squirrel Terrariums 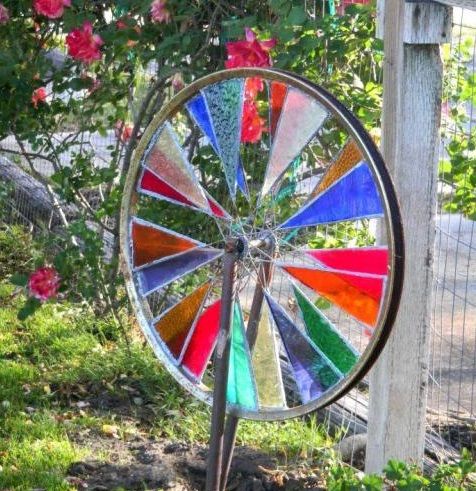 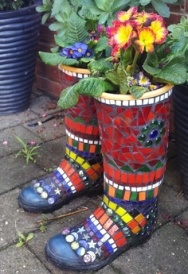 TALK about frustrating! I have a case of laryngitis.  If you know me, then you know how much I love to talk.

Have a great weekend.  Why don’t you talk to a friend, sing a song, or recite a poem or short story out loud this weekend?  Vocalize your thoughts and wishes.

I’ll see you back here on Monday.

Posted on November 21, 2013 by LookingAtGlass

Today I am looking at a chandelier by Ettore Sottsass.

I took a few minutes yesterday to look at the auction catalog for Wright’s upcoming December Design sale on December 12, 2013.  This sale brings together the most notable designs of the past century. Wright’s December Design sale focuses on rare commissioned forms, works produced in small editions and works of historical importance.

This chandelier (Lot 250) by Ettore Sottsass looks fabulous.  According to Wikipedia, Ettore Sottsass was an Italian architect and designer of the late 20th century. His body of designs included furniture, jewelry, glass, lighting and office machine design.  Count me as a new Ettore Sottsass admirer.

Signed with incised manufacturer’s mark to one element: [Venini 85]